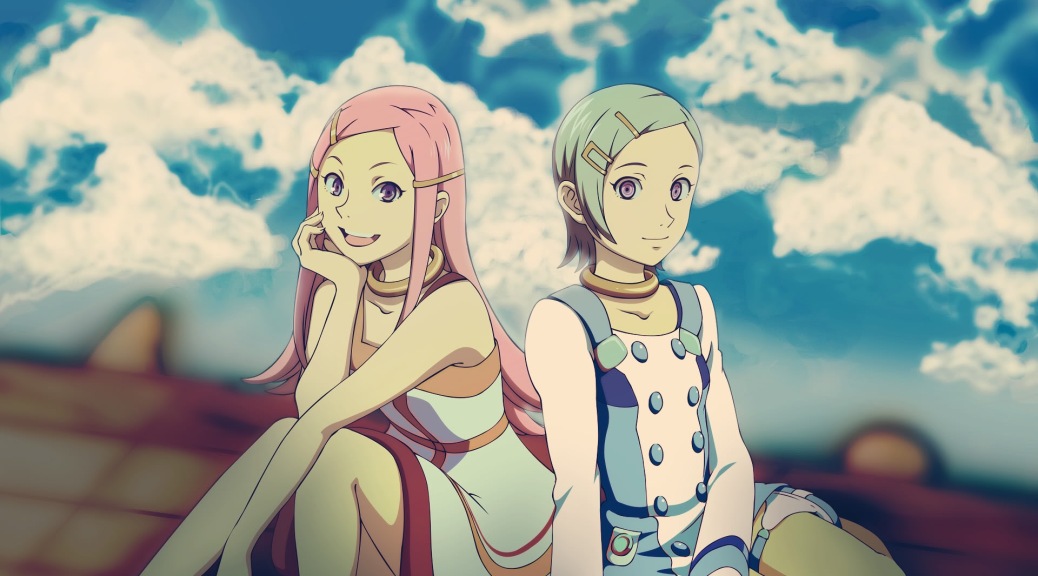 Thinking back a few months to when I watched Eureka Seven, a pattern started to emerge. Often times people complain about the lack of strong female characters in entertainment, and anime is no exception. While many of those criticisms are valid, the idea that anime is lacking in strong female characters is one that I take with a grain of salt, and Eureka Seven is one of the reasons why.

From the outside looking in, it might seem like a show dominated by its male leads, but often times this is not the case at all. Even though Renton is the main character most of the time, the majority of the focus of the show is on Eureka and the struggle she faces as a member of the Gekkostate. Renton most of the time is portrayed as young, dumb fourteen-year-old who more often than not both admires and looks up to Eureka for guidance about the Nirvash and his role on the Gekkostate. Tolho is another strong female character who helps support Holland in much the same way. She is there for Holland when he needs her, but is also a pilot of the Gekko. Both of these relationships in the show are treated as equal partnerships rather than the males constantly supporting the females.

Another place where Eureka Seven’s feminist streak shines through is in the dynamics of its romantic relationships. In the beginning, when Renton joins Gekkostate and falls in love with Eureka, he treats her more so like an object to be desired rather than valuing her as a person. As time goes on, he realizes that this way of loving Eureka only serves to dehumanize her. Not to mention that this way of thinking often gets him in trouble with both Eureka and the other members of the gekkostate, who are protective of her.

Renton eventually realizes that in order to really love eureka in a meaningful way that he has to get to know her as a person. Throughout their journey on the Gekkostate and as the pilots of the Nirvash, Renton and Eureka come to love and respect each other. Their relationship is not one built on a desire for one another, but rather, as the show beautifully puts it, as a family. They do not operate independently of each other. They rely on each other caring and understanding in order to succeed.

For these reasons, if you are looking for entertainment for strong female characters and respect for women, then Eureka Seven is a show not to be missed.

4 thoughts on “Opinion: Does Eureka Seven have a Feminist Streak?”