Unfortunately, the shows I’ve chosen to watch this season have ranged from ok, to mediocre, to outright awful. I can’t really tell if this is because I did little to no research on the shows that I picked up, or if I just have really terrible luck, but I seemed to have gotten the worst of the bunch.

I know this because many of the of the other shows that I happened to not see, either because of lack of legal means to watch or because I just wasn’t aware of it at the time, like Princess Principle, Kakegurui, and Made in Abyss have all had their praises sung from the time they started airing.

Somehow, aside from AHO-girl and Tsuredure Children, I picked up three of the most terrible shows from this season. AHO-girl is the only show I could consider among these to be legitimately good. As I’ve discussed before here, it’s low brow humor is still very widely appealing, and in recent episodes, the jokes have expanded and only gotten funnier.

Meanwhile, the other shows that I’ve watched all suffer from an illness known as terrible. As I’ve discussed before on my blog, Classroom of the Elite and GAMERS! both lack a compelling direction for their narrative. Classroom of the Elite has more recently gotten wrapped in a somewhat unnecessary side plot that focuses on a secret idol named Sakura. She gives a testimony to help the Sudo, the classes’ drop out, avoid being expelled for beating up three upper classmen. This really felt like a departure from what started out as a really interesting and exciting premise.

GAMERS!, which did a complete one eighty in terms of the direction in the first episode, turned into nothing but a somewhat funny, but ultimately mediocre ROM-COM. More recently, it has become a relationship Pentagon that is only as confusing as it is because apparently nobody in the show knows how to deal relationships in a serious way.

I also recently have watched parts of In Another World with My Smartphone. While I may do a full review in the future, I can tell you right now that I am not a fan. In an anime landscape that is currently full of Isekai shows, this one really had to do something different to impress. 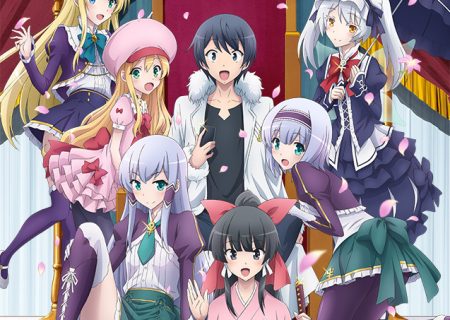 Not only did it not do something different, but it might possibly have inadvertently created the strongest characters of all time. Touya can use all of the worlds magic, has infinite mana, and can use his phone to increase the power of his magic. It’s like they took Kirito from Sword Art Online and said: “No, this guy needs to be more unbeatable!” I started a running joke between a friend of mine and me that Touya is pretty much the new god of this world and should be treated as such.

AHO-Girl, therefore, stands at the top of the shows I’ve watched during the summer 2017 season. It is a really good comedy and should be praised as such, but most of my picks this season were honestly just garbage, and I’ll probably be dropping most of them soon.

One thought on “Update: AHO-Girl is the best thing I’ve watched this season. Here’s why.”