Review- Classroom of the Elite: What Was This Supposed To Be?

Finishing up the reviews from last week, I wanted to talk about Classroom of the Elite, for a few reasons. One of the major ones is that I can’t understand what this 12 episode studio Lerche production was really trying to do. It seems to want to go in a lot of different directions without deciding on one, and it’s a worse show because of it.

The Story of Classroom of the Elite centers around Ayanokouji Kiyotaka having just joined Koudo Isukei High School, a state of the art facility where almost all of the students graduate and find a job. The school is divided into Classes A, B, C, and D from highest performing to lowest performing, and Ayanokouji happens to end up in Class D. The members of class D are initially given 100,000 points to spend at the school, where there is food and other amenities to spend points on. Everything seems to be going great for the students until they realize that those points were actually a test and that they won’t be getting any more until they do better. 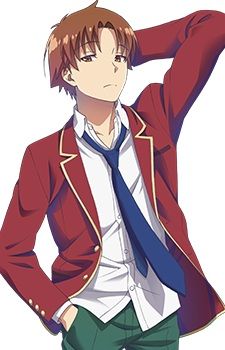 Initially, I was excited about this series. It seemed like it could go a thousand different unique directions and tackle a lot of interesting subject matter, but it ended up going in all one-thousand of those directions and not really trying to stick to anything. For the first few episodes it stuck with its original premise, then it moved on to a crime drama in which AyanoKouji and his other classmates have to prove Sudo’s innocence, then it turned into a fanservice show, and finally, it became a wilderness survival show. Classroom of the Elite tried so many different directions that it never really got good at any of them.

Its lack of direction isn’t the only thing that hurts it because the show’s characters can be classified as either bland or unoriginal. Ayanokouji certainly comes off as the latter, and the show’s other main character Horikita falls under the former. The only other characters really worth mentioning are Sakura and Kushida who also fall under extremely bland.

The writing overall can be classified as uninspired.

The music of the show doesn’t really stand out either. There isn’t any standout track that makes me want to go back and listen to the whole thing to see if I missed something, and most of it just sort of blends together to the point of not even realizing it’s there.

The animation, I feel like I’m repeating myself, sits somewhere in between slightly above average and slightly below average. Nothing about the art style was overly interesting, but it also wasn’t horrifically bad. There weren’t any problems with the quality of the animation either, and the few action intensive scenes the show gives us look good.

The Members of Class D

I already said it in another post, but most of the shows in the summer season were painfully average. There was nothing offensively bad about them, but nothing really stood out as overachieving, and that’s the best summary for this show as well. I would recommend you skip it and not waste your time.