March Comes in Like a Lion Season 2 Episode 7: A Return to Form and Renewed Passion

Posted on November 26, 2017 by Jack Scheibelein Leave a comment

For the first time in this show, we’ve actually been introduced two characters worth hating in one episode. Well, technically the teacher was introduced a couple of episodes ago, but we didn’t really see the extent to which she is worth hating until this episode came out.

The show opens innocently enough on Hina lying on the ground of her living room with a nosebleed. Rei walks in with some fresh peaches, and Hina gets embarrassed by her nose bleed and asks Akari for a towel. Rei tries to cheer her up by telling her that everyone gets them, and then hilariously undermines his point by saying that he has never had one. 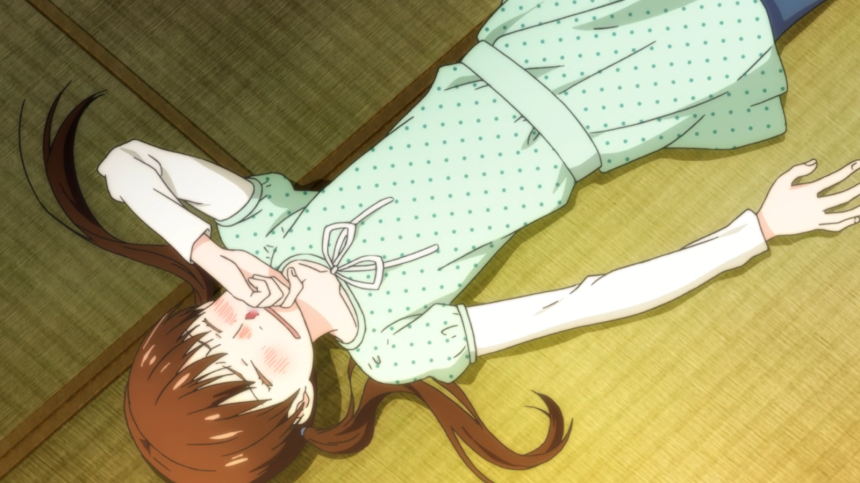 Rei thinking about all the nosebleeds he’ll never have.

Hina thanks, Rei, presumably for all the time that Rei has spent with her, talking about what has been going on at school, but also for making her feel like she can be herself, and that she doesn’t need to be ashamed of who she is. Rei responds, noticeably happier with “sure.”

Rei and Akari head to the store for a sale and leave Hina in the house to let her nose bleed heal up. While walking over a bridge to get to the store, Akari tells Rei about Hina’s trouble at school with her teacher. Hina’s teacher is one of those characters worth hating because she is quite possibly one of the worst teachers I have ever seen.

As you might remember from last week, when her teacher walked in and saw what had been written on the board, she asks Hina, “What is the meaning of this?” and implicitly blames her for writing negative things about herself on the board. If you think that’s bad, just wait.

When the teacher and Hina are talking after school, she asks Hina “why can’t you get along with everyone else?” After that, when Hina accurately points out that this blatant bullying has been going on for quite a while, and is the reason that Chiho left, she says “don’t raise your voice at me,” as if to shut out all conversation about the matter.

You can really tell from a conversation like this just how bad of an educator she is. A large part of a teachers job is being in tune with what your students are going through, and if she isn’t even paying enough attention to realize that Hina isn’t the problem, then she really doesn’t need to be a teacher.

After hearing that from her teacher, Akari explains how angry and upset Hina was, with Hina silhouette surrounded by a sea of red, properly conveying those feelings of anger and sadness to the audience. Akari then starts to worry about what would happen if she had to go to a parent-teacher conference, wondering who exactly she should get to go with Hina. Meanwhile, Rei stands watching her go through this nervous, presumably feeling jealous because the next thing he does is scream “Me Too!” from the top of his lungs.

In this moment, when he uncharacteristically screams from the top of his lungs, we learn a lot about Rei’s current mindset. Rei wants to be someone that the Kawamoto sisters, and especially Hina, can rely on for help, so when Akari lists off names of family members and doesn’t include him he feels attacked.

The episode’s first half ends with another important admission. After talking with Nikkaido on the phone about the newcomer’s tournament, Rei opens up the door of his apartment and thinks about Hina, but also about himself. Of course, He cares about Hina and wants her to be happy, but his reasons are also a bit more selfish. The last line of the first episode is “I:

This one line reveals just how much Rei is still dealing with himself, almost as if he’s using Hina’s problems as an excuse to not deal with his own.

With Rei waking up to a brand new day and the beginning of the second half, we see Rei headed to play his semi-final match in the newcomer’s tournament. On the way to his match, we see that Rei is not only ready to play his match, but that for the first time in his Shogi career, he actively wants to win. In this match, Rei isn’t just playing because he’s good at it, but instead because he see’s winning as both a way to help Hina and also as a prize in and of itself.

His opponent and the main focus of the episode is a man named Subaru Hachiya, an up-and-comer in the Shogi scene who is infamously known as “The Irritated Prince of the East.” Why? Because throughout his matches he likes to make clicks with his mouth, tap his finger, shake his legs, and be an overall distraction. In this regard, he is a polar opposite of Rei, who enjoys the quiet atmosphere that usually comes with a Shogi match

After a long and grueling match for Rei, he takes the win and cements himself as a finalist of the tournament. His friends from the association, however, are a bit annoyed. Sakutarou and Tatsuyuki both blame him for making Hachiya to his annoying ticks more loudly, using the metaphor of a buzzing bee. Sakutarou tells Rei that the two are very alike, and feeling personally attacked Rei tries to rebut with a “how?” to which the two reply while cutting him off:

The episode then ends with Rei having to hang out with Hachiya because he wanted to apologize.

What did you guys think of this episode? Are Rei and Hachiya both huge narcissists? Let me know in the comments. Thanks for reading and bye for now, Friendos!