The 5 Best Things About Food Wars

I’ll be honest, after just finishing Food Wars, I do not know how much I have to say about it. That being said, instead of doing a review I thought it would be more interesting to point out what I thought were the best points of the anime. So here are the 5 best things about Food Wars 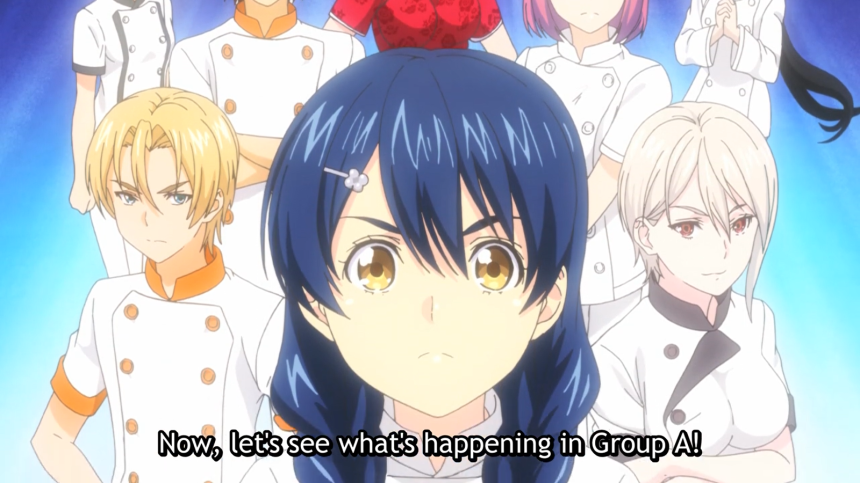 Cooking in Food Wars is a largely individual experience. It is true, as they explain, that eventually, you will be working with a team, but when it comes to the creation of Unique dishes and exploring the type of cooking that each person is most connected with the individual is at the forefront. The individuality in each character’s cooking largely comes from who they are and what they are trying to accomplish. In the beginning, Soma makes it clear that he wants to surpass his dad and go back to the Yukihira diner. These motivations are reflected in the type of food he makes during different cooking battles. Most of the dishes he makes are made using either cheap ingredients or cooking techniques you wood mind at a diner. In Megumi’s case, her food comes from her growing up in a rural harbor town, and also from her love of her towns freshly grown vegetables. Almost all of the characters in Food Wars have unique backgrounds that are reflected in their cooking. If the show were set in any normal cooking school, then it honestly would not be as fun. The setting of Totsuki Academy and the various organizations that are associated with it make for a wild ride that forces students to compete for the top spot, and in turn brings out the best of their cooking abilities. It would be interesting to see the show explore more of the activities of research societies and their role at the school, but what the show has given so far is pretty damn cool.

Totsuki’s unique way of having students put their skills to the test is by far one of the most entertaining parts of the show. Even someone who does not understand cooking can appreciate the amount of work that goes into creating a dish that allows them to compete as professionals, not to mention just how good the food looks after it’s all said and done, especially that curry filled Calzone from the first season. This leads to the next spot on the list:

If I could ever get my hands on anything made in Food Wars, I think I would honestly die. It seems like a lot of thought went into the writing of the show and the food that each character specialized in, and boy does it pay off. As the seasons go on, the food only looks better and better.

Food Wars would not be nearly as good as it is without the show’s main character. Soma is definitely not the typical Shonen protagonist. He is passionate, driven, always wanting to improve and is willing to be friends with pretty much anyone. Soma takes in all of the knowledge he has from past experiences and uses them to his advantage, no matter what the situation. He also represents much more interesting ideas than the average Shonen protagonist. As I’ve written about before, Soma speaks to the common man, and rejects the idea that only gourmet food is fit for consumption. Truly, he is a man of the people.