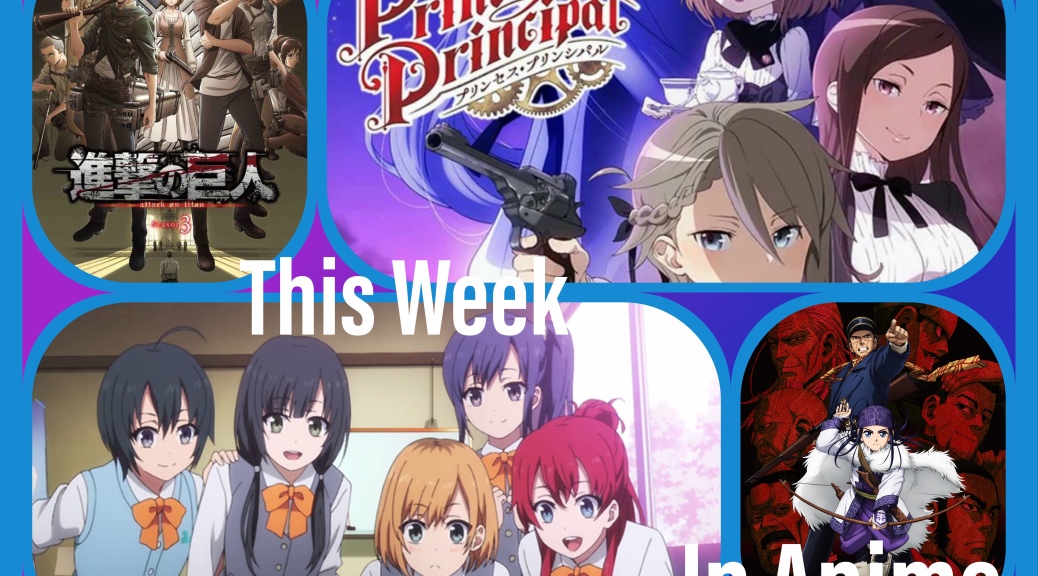 Another week has gone by, and another week of important anime news has been built up. Time to flush it out in another edition of This Week in Anime. Let’s get started.

The announcement for Shirobako came via the English Twitter account for P.A. Works, who animated the show’s first season.

A release date has not yet been announced, but many of the show’s original staff have been confirmed for a return to the movie’s production, including Tsutomi Mizushima as the director, Michiko Yokote as the screenwriter and Ponkan8 as the character designer.

Princess Principal has had a release date confirmed for 2019 for the first film in the series. Details have not yet currently been released, but the will likely arrive soon given the already confirmed release date.

Attack on Titan Season 3 to Air on July 23

The show’s third season will focus on the “Uprising Arc” which follows an origin story about the Titans, as well as an attempted government takeover. While it has not been confirmed as of the writing of this article, the show has been rumored to be 24 episodes in length to the amount of content being adapted.

The English Dub production of Golden Kamuy, produced by Funimation, aired its first episode on Monday, and as it turns out, Funimation brought at two of its most experienced voice actors. Ian Sinclair has taken the role of Sugimoto, and Asirpa is being played by Monica Rial.

Both of the voice actors have had much experience in the realm of anime, including filling many famous roles. Sinclair previously played characters such as Dandy from Space Dandy, Bardroy from Black Butler and Ginei from Rosario + Vampire. Rial, meanwhile, has had roles such as Rize from Tokyo Ghoul, Index from A Certain Magical Index and Panty from Panty and Stocking with Garterbelt.

I didn’t really have a lot to say about these stories, so I decided to just lay of the commentary for this week. Hopefully the stuff next week gives me more to talk about.

One thought on “This Week in Anime: New Sequel Films, Attack on Titan and More…”