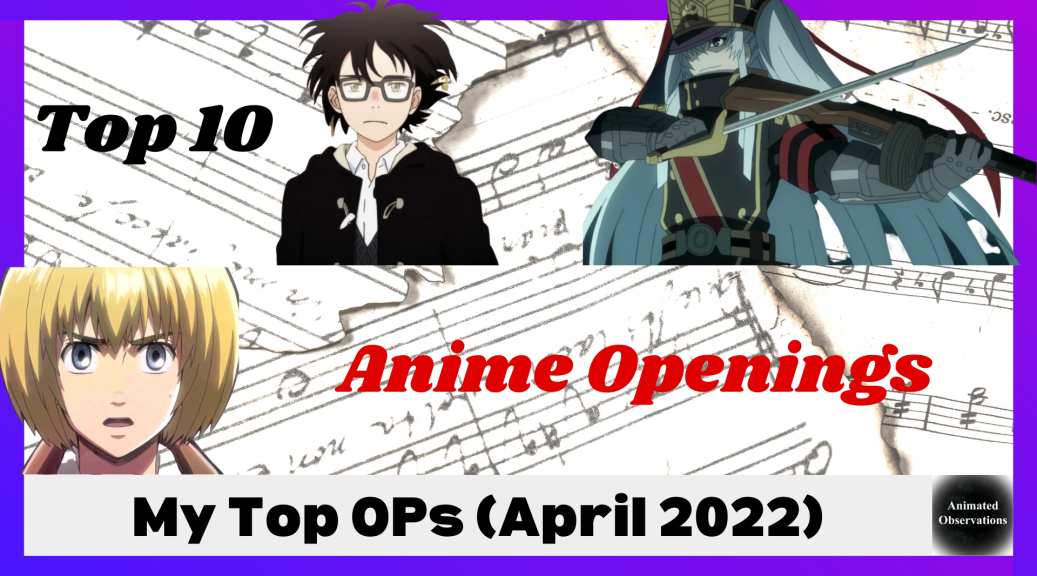 In the latter months of last year, I put out a post detailing my favorite anime. For as superficial as it might be to try and pin down favorites, it was a post that I had a lot of fun working on, both organizationally and in writing it. So, I thought it would be a good idea to work on another listicle, and talk about some of my favorite anime openings. While their is some crossover between the two, my favorite openings tend not to be attached to my favorite shows, so this will probably still end up being a surprise for most.

I figured this time around it would be worth including at least one of the honorable mentions so that people know what else was in contention for my top 10. Vocalist Sumika has some damn good pipes, and man is that chorus infectious as hell. On top of that, the visuals are incredibly fun and give a really good representation of the personalities of the main characters. The main reason it is not only the list proper is that, while it is overall a really solid OP, the middle section drags a little bit more than the openings above it. Overall, though, a really solid piece.

Listen, I already warned everyone this is going to be a weird list, so that means no judgment whatsoever (Jk, feel free to tell me how wrong I am in the comments). In all seriousness, I know this probably is not everyone’s cup of tea, however, the Japanese hip-hop group Home Made Kazoku sells the song with a passion that I kind of respect in a campy, 90’s hip-hop kind of way. Their near yelling over this saxophone accented beat is hype in a way that feels hard to explain. Visually, this is definitely the weakest of the openings on here, which is why it stays at number 10.

A theme that might emerge for some in my discussions of these openings is that I care way more about the music than the visuals. Of course, good visuals are nice, but when being compared to the angelic vocals of singers like Lia it feels way less important. That is not to say that the visuals of Angel Beats‘ first OP are bad. In fact, I think the through-line of Kana playing the Piano in various places across the school grounds is a great visual representation of how she manages to affect all of their lives while they figure out what is even happening to them. The visuals are definitely a lesser factor for me, but certainly not a non-factor.

Call it what you will, Nu Metal, Butt Rock, etc, the combination of rock and hip-hop elements has always been a staple in my musical diet, at least up until recently. Air Gear, meanwhile, feels like the perfect fit for the song. A show about battling on rollerblades might as well embrace the edginess. The opening definitely looks its age, with some pretty barebones movement, but it does at least have a narrative, and while the version above does not show it, the credits are pretty well integrated into said narrative.

On the other hand, maybe sometimes there can be too much narrative. Looking back at “Jiyuu no Tsubasa” while also just so happening to be in the middle of marathoning Attack on Titan (more on that later), it is pretty hilarious how many clues it just hands out. Still, what makes me like it more than its first-season counterpart, other than just being a contrarian, is the way it focuses on that mystery. The series is at its strongest while focusing on the secrets of the world they inhabit, and this opening does that the best, with no questions.

Fun fact: I have yet to watch a single second of the series proper, despite generally enjoying its predecessor Higurashi. On the other hand, why would I when this opening goes as hard as it does? After originally hearing the song in the background of Glass Reflections’ review of the series, I was instantly in love. It is one of the few openings on this list that I have known about for a long time, and musically it has stuck with me. Something about the chants in the beginning and the buildup to the chorus just feels right.

5. Goodbye Bystander – Yuki – March Comes in Like a Lion OP 2

Of course, if we are talking about openings with a good narrative… Honestly, when everything was said and done, I expected Goodbye Bystander to be a bit closer to the bottom since I had never really remembered any of the March openings super fondly. Yet, as I went back and listened, I could not help but get swept away by the magical instrumentation accompanying Yuki’s heartfelt performance on this song. Both lyrically and visually, the song also talks about an important aspect of the show, one in which Rei is not only becoming more comfortable in his arrangement with the Kawamoto sisters but also realizing the debt he owes them.

If there is one thing I resent about Amazon’s Anime Strike channel, other than being overpriced for no reason, it is keeping this show behind a paywall and thus not letting as many people see it. Re:Creators is such a phenomenal anime, and alongside it are two incredibly produced OPs, the first of which just happens to be more my speed. Add in the fact that the opening looks just as good as the rest of the anime, and it should be pretty obvious why it is this high.

I made a rule early on in the creation of this list that their would only be one opening per series. This is because, without that rule, Phi Brain very likely would have snagged three spots on the list. Both of its first two openings “Brain Diver” and “Now or Never” have been heavy in my rotation since I watched the series a few years back. Still, I went with with the third one because it is both visually pleasing and one of the harder hitting songs instrumentally. Neko is an expressive vocalist who commands attention not only during the chorus but throughout the song.

The reason I clarified my focus on music as opposed to visuals beforehand is because, well, this opening is as high as it is on the music alone. While it is definitely better than some of other openings here as far as the animation, it would definitely be lower were my focus changed. However, that does not matter much considering how incredible the music actually is. The use of flute as one of the primary drivers of melody in the song gives it this really interesting property of being continually hopeful despite some of the darker turns. Fairytail is probably one of the worst when it comes to the whole power of friendship thing.

Was it ever really a competition? the answer is yes, it definitely was. However, Log Horizon‘s hard hitting Man With a Mission opening beats it out, partially on nostalgia but also because it takes a lot of what I like about Air Gear‘s opening and turns it up to 11. It may not be as distinct musically as some of the other openings here, but the computerized intro and solid English verse delivered by Takuma certainly give it an identity of its own. On top of that, the art and action present in the series translate really well into the animation, which just looks really cool, even if the storytelling is limited. “Database,” at least for now, is my favorite opening.

And that’s the list, Is there an opening that I missed? One you just want to recommend? Should I do anime endings next? Let me know down in the comments.

As always, special shoutout to Jenn for supporting the blog on Patreon