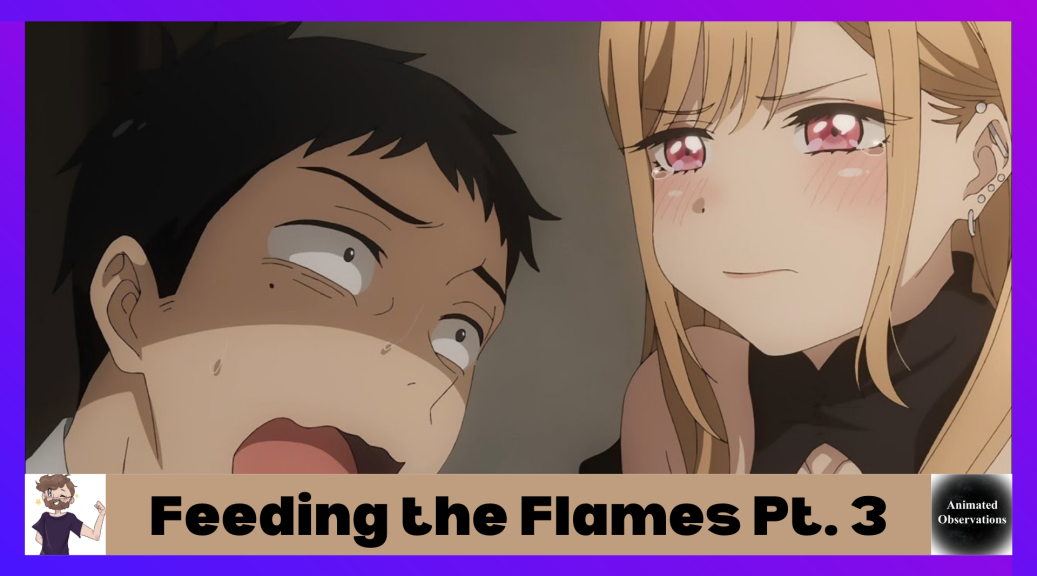 The internet certainly is a place, or rather a space? It does feel a little weird to try and quantify it in terms of geographical space when for all practical purposes the internet is more or less infinite. Yet, increasingly it feels as though there is less and less space for people’s terrible opinions. Well, unfortunately you all are getting mine today, as it is time for another installation of feeding the flames.

I had been thinking about this one for a while, and prior to the release of Belle I was still somewhat in the camp of both of them being relatively equal. However, while I still have plenty of criticism of the film itself, Belle did make me realize that Hosoda is just a better storyteller, straight up. While the more style over substance approach Shinkai has since popularized works sometimes, riding on it for a significant portion of his career leaves a lot to be desired.

Marin from My Dress-Up Darling is a good character, actually

The early episodes of My Dress-Up Darling seemed to promise a fun albeit uncompelling slice of life/romance. After all, its entire second episode was dedicated to an unfunny bit where Gojo was nervous about taking her measurement. Yet, as the series has continued over the season, Marin has become significantly more 3-Dimensional in terms of her development and is otherwise turning out to be incredibly likable. Assuming this blurb does not jinx the series into a terrible ending, it feels like Marin will only continue to get better as a character.

The Tokyo Ghoul manga is better

This is probably only a hot take amongst the hardcore anime fans, but yeah, it is true. As much as I enjoyed both seasons of the original Tokyo Ghoul, it would be hard to argue that it’s handling of the manga’s original story was worthwhile. Whereas the manga took the time to tie together threads which gave some of the side characters and villains the characterization they needed to be compelling, the anime forgoes this development in favor of a more rushed and sloppy ending.

Fanservice is only good in context

People have been arguing about the merits and demerits of fanservice basically as long as the anime community. However, fanservice as a concept is not just good or bad. What counts as good fanservice depends entirely on what is happening in the story. the fanservice in Fire Force, for example, is not bad because it is fanservice but rather because it often takes a very serious tone and immediately interrupts it.

Got some hot takes yourself? Feel free to share down below.

As always, thank you to Jenn for continuing to support the blog!

It has been a while since I did a post like this, but Dewbond’s similarly focused series Don’t @ Me made me realize just how much fun giving random, semi-related hot takes about things can be. After all, what is the point of the internet if not to get people arguing in the comments section?

With that being said, let us get started.

One Piece isn’t worth it

We are starting off strong in this one, and yeah, sorry not sorry. Maybe this is easy for me to say because I am not on the other side of it, but a series that takes 50 episodes minimum to get anywhere close to interesting, let alone getting through now 1000 episodes. While I can understand and even appreciate people’s passion for the series, I just have no reason to invest that much time into a show while barely enjoying it.

For as much of a disappointment as this series was, and much to many people’s, including my own, dismay, Wonder Egg Priority will likely see at least one nomination at the Crunchyroll Anime Awards for next year. Now, this does not mean that anime awards are always a perfect measure of quality, but the series does appeal enough to reviewer types like myself and probably a lot of the people who will act as judges to land at least a nomination. This will almost certainly be the case even despite the series lackluster ending.

Sora has the best Smash reveal trailer in all of smash

Listen, I know I’m milking this one for all its worth, but just let me have this, ok?! Obviously, full bias here, as Kingdom Hearts is a cherished memory of mine, but even so, Sora’s reveal for Smash is the most hype trailer for a couple of reasons. First, The main plotline serves as a callback to the World of Light story, in which the characters are captured by darkness. This mirrors perfectly the story of Kingdom Hearts, in which Sora must use the power of light to defeat the darkness. On top of that, the trailer has some top-tier animation along with some amazing meme potential without feeling entirely like a joke. Iconic is an understatement.

Fractured in Alterac Valley will be a good set, actually

This one will be for all two of my readers who are also Hearthstone players, but the upcoming set “Fractured in Alterac Valley” looks to be an exciting set, even without the addition of new hero cards. The cards seem significantly more measured in their impact even while looking incredibly powerful. In particular, the callback to burgle Rogue, while not super convincing from a power level perspective, does seem to be lining up as a fun archetype. Big Mage, even more, seems to be a legitimate threat as far the meta is concerned. Despite the popularity of standard format going down a significant amount, there is still plenty of fun to be had.

Have a hot take of your own? Just want to argue? Leave a comment down below.

So, yeah, this week has been pretty crazy, to say the least. Online school is already making me rethink even being enrolled in college right now, and on top of that my classes are not holding anything back, even for the first week. Nothing I haven’t dealt with before, but it definitely does not help that I cannot really physically interact with any of my professors and that I do not have access to any of the normal on campus resources.

Long story short, I have not had much time for blog writing this week, and since I never really took the time to write back-up posts, (which I definitely should have) today I’ll be borrowing an idea from K at the Movies (who you all should go follow) and list a few of my hot takes. With that being said, lets get started.

If you’ve spent any amount of time on this blog you know that my love for “March Comes in Like a Lion” is huge. I even have a series dedicated to analyzing it in detail. However, I don’t like the series in spite of it being bad, quite the opposite. March is arguably the best thing to come out shaft, period. The way it combines Studio Shaft’s animation style of with incredible character drama and important messages about mental health, bullying, and a load of other subjects is truly an incredible feat.

I remember a bit earlier this year when the Meliodas vs Escanor fight came out and people were blowing up over the quality of the animation. Immediately after seeing a few of those posts I thought “you all are just realizing now that the show is garbage?” Seven Deadly Sins is what I would consider an entry level anime, but its not a particularly good one. The story is fairly basic until much later on in the show, with Meliodas on a journey to gather the sins. On top of that, none of the characters outside of a few of the side characters are particularly interesting, and then on top of THAT the show has the audacity to reuse the same, unfunny sexual harassment joke nearly every episode. If you are desperate for something to watch because you have exhausted all your other options when it comes to Shounen series, honestly just re-watch something cause this is not it, chief.

The Fan-base in the Only Bad Thing about Persona 5

People love to complain about toxic fan-bases when it comes to different media properties, and I agree. It sucks when all you want to do is talk about or interact in other ways with something you love, only to have a large percentage of the people who also love that thing be absolutely trash human beings. However, it still does not make sense to use the toxic nature of a property’s fan-base as a way to judge the quality of said thing. Persona 5 does attract a lot of cringe individuals, especially given the games popularity. Despite this, the game is nearly flawless in every way, especially the updated version “Royal,” and certainly more people should get to experience it without having to deal with its fans.

Thank you all for reading this week. I know this is more of just a filler post, but if nothing else goes horribly wrong than Wednesday and next Sunday will be back to back “Aku no Hana” action! However, if you do enjoy stuff like this than please leave a comment and let me know if you would like to see more.