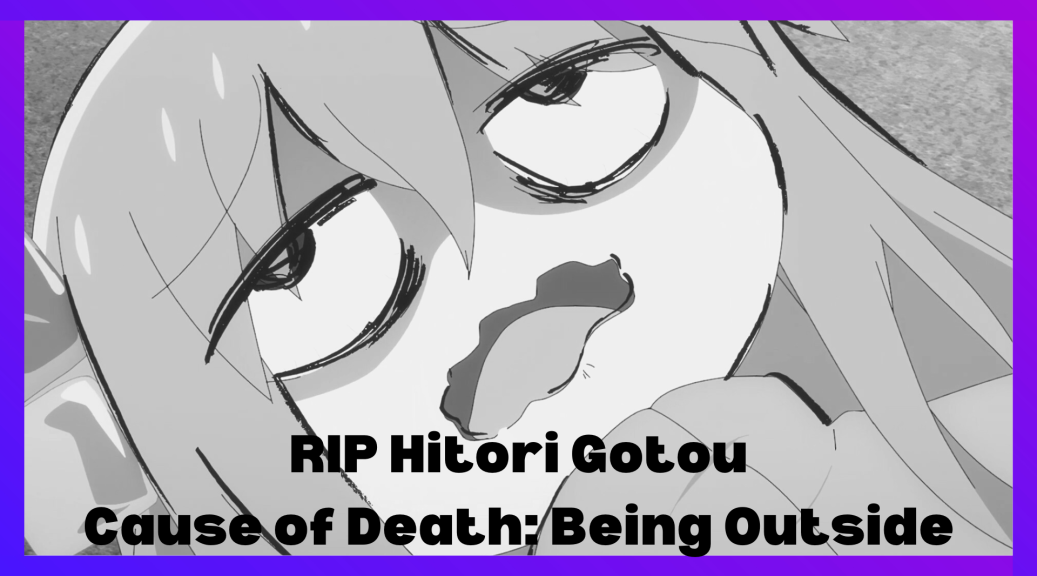 Actually, that intro is kind of insulting to Bocchi the Rock, since K-ON is definitely worse in like every way, but I will save that conversation for a Feeding the Flames post (whenever that comes out).

Bocchi was a show that was not at all on my radar until the beginning of this year, and considering the amount of backlog I have from just 2022, I was skeptical about giving it a chance. However, after watching anitwitter go crazy for it week after week, I caved and ultimately gave in to my own curiosity.

For those unaware, Bocchi the Rock is adapted from a four-panel manga of the same name, detailing the adventures of Hitori Gotoh, a high school first year who spent the last three years of her life learning guitar and making solo covers of popular songs in her closet and uploading them to YouTube under the name Guitarhero. Her dream, however, is to overcome her extreme social ineptitude, make friends, and form a band where she can become famous, and it seems as though she might finally get that chance.

Any show that focuses heavily on one character is, of course, going to live or die depending on how that character is perceived. It is unlikely that a show like Naruto would be as well-liked by fans if the character was poorly written and hard to root for.

Though I certainly would not call Bocchi poorly written, by any means, she…well, has a pretty abrasively introverted personality. For her, even thinking about archetypical high school summer romances or bonding with friends is enough to send her into a spiral, mostly because she then has to think about how she can’t enjoy any of that.

Granted, none of this is inherently a bad thing. The socially incompetent loner trope is one that anime is all too familiar with, especially given the audience that anime as a medium tends to attract. That said, Bocchi’s character does ride a pretty fine line when it comes to enacting that personality, and sometimes it can be a bit grating.

I do understand that its source material and the format thereof do kind of limit the possible character development since four-panel manga are made for quick witty punchlines. However, given the fact that the anime does set up her desire to grow as a person, having her overreact in literally every situation can get a tad annoying.

Luckily, though, the show also has a great supporting cast to balance out the semi-repetitive bits that pop up around Bocchi. This includes Nijika, the band’s drummer and usually the one with her head on straight, as well as Ryou, the bassist who can be generally dubbed the “weird one,” and then Kita, the band’s vocalist and second guitarist whose outgoing, extroverted attitudes often clashes with the other three in admittedly hilarious ways.

There are a number of others as well, all of whom are also generally likable and fun to see on screen, most notable of which are Nijika’s sister Seika, who is the manager and owner of Starry, the club where they often perform, along with Bocchi’s family. A lot of the humor in the show usually derives from one or more of the supporting cast contrasting their relatively normal personalities against Bocchi’s often insane delusions about where her life will be and her relationship with performing

Though this can be somewhat grating as previously mentioned, enough of the bits are focused on other characters so that it does always feel like Bocchi is the center of attention, even though she is supposed to be.

Still, even when the show is not trying to be funny, it does land quite a bit with its more thoughtful and reflective moments. Music is clearly a passion for the characters it affects, and Bocchi’s story of overcoming social anxiety and making friends, when not being played up to the extreme, is genuinely heartwarming. The passion the bandmates share for their work is something that feels real, and it is much appreciated.

There are two comedy anime in the last year that have actually made me laugh out loud multiple times: Kaguya-sama: Love is War and Bocchi the Rock and the reason why is actually pretty similar between the two. I talked about visual humor a lot over the course of my reviews of Kaguya-sama, and one of the things that made it work, especially in later seasons, is its ability to execute jokes really well, playing up each character’s defining personality traits or central conflicts with visually stimulating elements.

Though, there is definitely a difference in approach stylistically. Whereas Kaguya-sama often opts to play into ideas surrounding high school romance and uses its visual humor to express how characters are feeling about the social ideas, Bocchi leans way more into an absurdist style of humor, with a healthy dose of anime, internet, and musical references mixed in for good measure.

Part of this simply comes from it being a four-panel manga originally. From what I understand, other adaptations like Azumanga Daioh approach their stories with similar humor. However, Bocchi brings its own unique flare, always coming back to the aforementioned absurdism influenced heavily by what would more accurately be described as “gen z” or “chronically online” humor.

In that regard, the anime also just looks really solid. Cloverworks as a studio has been on the come-up recently (outside of The Promised Neverland season two but we can just ignore that for now). Even so, more of the credit should probably be going towards director Keiichirou Saitou and animation director/character designer Kiyoki Rikuta, because a lot of this show just would not work if it were not for how amazing it looks, especially during its visual gags.

Somehow I almost forgot to talk about the music in this BAND anime. Whoopsie. The music is…well, a lot better than I expected, especially the songs directly related to the girls as a band. Sonically it sounds like normal J-rock that I would hear turning on any Japanese Spotify playlist. However, I do appreciate the lyrical segments of the songs and how they feel like a combination of everyone’s more eclectic personalities.

The soundtrack was also pretty solid if maybe a little bit more on the unremarkable side. However, I suppose in a way it kind of works, since the show is focusing more on the girls’ early period as a band. So, yeah, not bad.

I actually ended up watching a fair bit more in 2022 than expected, but even so, Bocchi definitely ranks toward my top end. It certainly is not making any grand artistic statements about society or the universe, but what it does have to say in combination with its well-executed humor and only slightly obnoxious main character hits where it needs to. Definitely something worth checking out.

How did you feel about Bocchi the Rock? Let me know down in the comments.

As always, special thanks to Jenn for supporting us on Patreon.